Blindsided By A Break Up?  Smile, There’s A Brighter Side To Being Single …

I've got great coaching on recovering from a break up below but IF YOU NEED A FAST START TO YOUR RECOVERY you can just click this link (don't worry - it opens in a new tab so you won't lose this page if you still want to read!) and request 3 FREE chapters from my book THE SYSTEM that has coached thousands of men worldwide to have greater success with women - and I've hand picked these chapters to give you a JUMP START on your entry back into the dating world - GET YOUR FREE CHAPTERS NOW!

A short while back, you were in a secure relationship with “The One”.

Perhaps you watched adoringly as she was opening Christmas gifts with a gleam in her eye. Maybe she even managed to force out an, “I love you,” after she finished unwrapping the presents you spent weeks of time picking out.

A short time later, the New Year brought about a major change to your future. Unfortunately, it was bad news that blindsided you like Von Miller on NFL gameday.

She hit you with the infamous, “Let’s just be friends” talk, and a sharp, stabbing jolt to the heart seemed to go with each word.

Now you’re on the sidelines going through post-concussion protocol, and not entirely sure how to get back into the action.

Actually, that last statement might even be preferable to the pain that you're feeling inside. Heartbreak after the holidays suck.

As your mind begins to settle, you might start wondering …

Where did I go wrong?

Was she that upset over the last argument?

Is she romantically involved with someone else yet?

Regardless, it’s like you’re living out the verse of the 70's Hall and Oates song- "She's gone!"- and you don't know what to do without her.

Cheer up! The timing couldn’t be better to find yourself single again. The following chart from InformationIsBeautiful.net shows why … 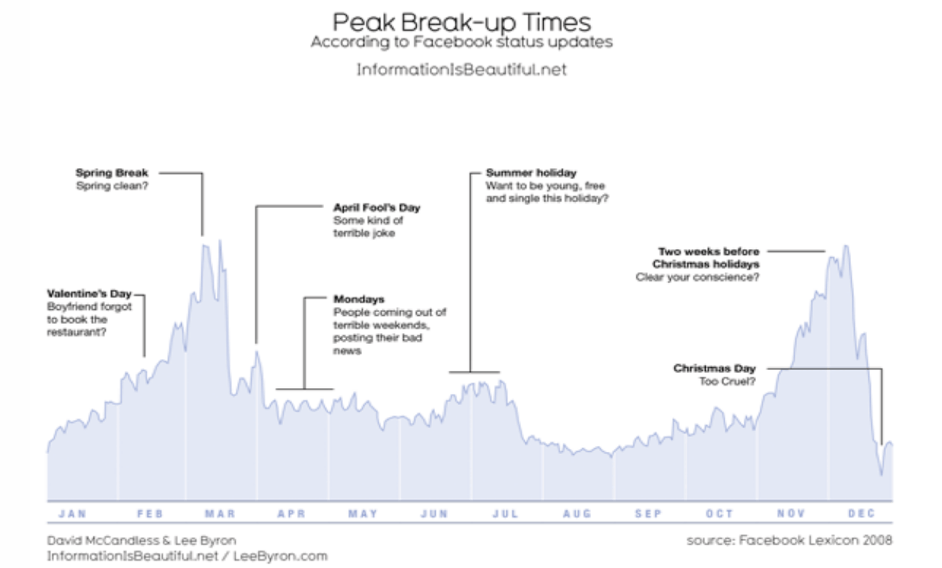 Breakups increase after New Year’s and reach peak a few weeks into March.

What’s that mean for you?

Lots of single women! And many of them will be looking to spark a new relationship too.

So, stop sulking in sorrow. Quit being angry.  Lick your wounds. Leave the past behind. Then focus your efforts on finding “Ms. Right”.

Starting over isn’t going to be easy.

But at least you’re not alone when it comes to searching for someone new. Because now you know that there are plenty of single women anxious to meet someone too. That should put you at ease about your single status.

Now before you go running off to meet “Ms. Right”, I want to give you some advice. Ignore the information and it will be like living Ground Hog's Day over and over again. Follow it and you'll never get blindsided again.

How can I make such a bold claim?

Simple. I’ve interviewed THOUSANDS of women over the decades, and had a chance to ask each one of them this simple question ...

Why do you choose to stay with one man versus another?

Of course, I had to probe deeper to find the real answers. But what I've learned has been nothing short of astonishing. Now it's my mission to share their thoughts with confused and frustrated men around the globe.

Single men have used this knowledge to become more confident in their ability to meet women. Get better at dating. It's even helped married men become masterful at keeping “Ms. Right” satisfied for life.

Many of my long-time students first encountered me after the holidays. Usually some time after the girl they thought they’d be with forever walked out the door. She could barely stand to stick around another 5 minutes. Even though a short time ago she was unwrapping holiday gifts that hard-earned cash was spent on.

Here’s a curious side note, even though admit that they lost interest a while ago, they always seem to leave without giving back the Christmas gifts. Guess there's a reason they wait until after the holidays to make their move.

At the moment, you might feel like it's the “End of The Road”. It's not. Breaking-up is a new beginning. So get out there and meet someone with more substance and character.

I'll even help you develop an improved mindset that will put you in the driver’s seat for your future relationship ...

I’m going to gift you 3 FREE Chapters from my book called- THE SYSTEM - Thousands of men across the globe have been listening to it daily, and as a result they’re …

Here's what makes my advice unique ...

I don’t manipulate you into thinking that there’s some clever pick-up line to pick up women.

Nope, there will be none of that.

I focus on helping you make the right mindset shifts. So that if and when the next break-up comes around, you’ll be the one making an exit out of the relationship.

Discover more about these 3 FREE Chapters Of “The System” right at the link below.

Wait!  Don't Leave Before I Give You 3 FREE Chapters of THE SYSTEM!